Borderless information. Northwest Germany and the north of the Netherlands are economically, historically and culturally connected on many levels. But in many media, reporting still ends at the border. And yet many people are interested in information about what is happening in their neighbouring country. This is where the INTERREG project “Without Borders” comes in with its news portal NOORD360 and a Dutch-German television programme.

Earthquake in the Groningen region. A serious accident just across the border. Corona measures in the neighbouring country. The construction of the longest bicycle bridge in Europe in Winschoten or the planned construction of a replica of the Eiffel Tower in Friesland. Issues that concern people. But also topics that they often don’t notice much of because they take place on the other side of the border. The “Without Borders” project of the Ems Dollart Region (EDR) aims to provide comprehensive reports on events in the entire region. This is done online via the news portal NOORD360 at www.noord360.eu and via the associated social media channels. The project also includes the TV programme “Without Borders”. It can be seen every month on Ems TV and in the Netherlands on RTV Drenthe. The implementation of the project is made possible by EU funding from the INTERREG V A funding programme Germany-Netherlands. 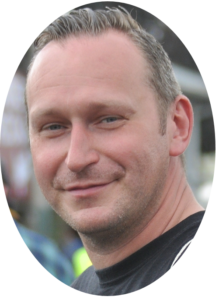 The whole region in view

“Many newspapers and other media often report only from their own area of distribution or from their own country. Something very serious has to happen outside this area for it to be mentioned,” says “Ohne Grenzen” project manager Mario Rauch. “Many people in our border region have a great interest in what is happening in the neighbouring country. Many Emslanders or East Frisians live so close to the border that events and news from neighbouring towns such as Emmen, Stadskanaal or Winschoten can be more relevant to them than news from their own district,” says Rauch.

And this is where the “Without Borders” project comes in: “We work on topics and events that are relevant for the northern border region on a daily basis. This is always done in both languages. In doing so, we have our whole region in view – i.e. the northern Dutch provinces of Groningen Drenthe and Friesland as well as large parts of the Weser-Ems region on the German side. With us it really is news without borders”.

The variety of topics is also unlimited: “We have no commercial background whatsoever. Therefore, we do not necessarily have to reach many people with every topic. Instead, we can also draw attention to topics that tend to have a small target group but are therefore no less interesting or less relevant. For example, when we report on the cross-border significance of Arp Schnitger pipe organs, it is certainly not interesting for everyone. But such topics still have a right to exist because of their cross-border cultural relevance and an interested target group,” explains Mario Rauch.

NOORD360 assumed a special function during the Corona crisis. “We have always reported very up-to-date on developments on the Dutch and German sides of our region. This made out of us the contact point for many cross-border questions. Many people came to find out more about the opening and closing of the border during the corona crisis. Others wanted to know what to consider when shopping in the neighbouring country and whether they had to wear a mouthguard, for example. The demand for reliable information rose sharply during the peak of the pandemic. We had very high access rates in our social media and in our news portal”.

Information source for other media

NOORD360 also fulfils another function: “We also see ourselves as service providers to explain cross-border relationships or cultural differences. That’s why we don’t just focus on current events, but sometimes go further in our explanations than other media to explain the Dutch or German context to people,” says Rauch, who is responsible for most of the texts together with his Dutch colleague Alfred Been.

“This is why we are often a source of information for many media. Editors of newspapers call us when they need background information on specific topics and events in the neighbouring country. We can then usually explain the context. Often it is only through us that they become aware of certain topics in the neighbouring country. But that was also one of the objectives of the project,” says Mario Rauch. “In the meantime, it should be clear to everyone that we are no competition for existing media and companies. We are not pursuing any commercial interest. We are a complement to existing media and journalists are welcome to use our services. We often link to existing newspaper articles and videos. In this way we ensure that the click rates of many media in our region increases because we point out to reports that many people would probably never have discovered otherwise”. 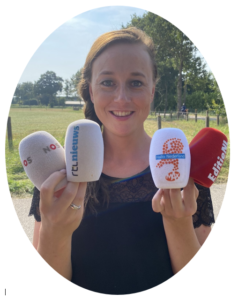 The aim of the project is to ensure that people in the border region have a better understanding of each other: “And this also means that certain events and topics can be placed in the official, historical or cultural context of the neighbouring country. We want to contribute to this. That is why we often provide the necessary background information in addition to the news,” says Rauch. This approach is particularly important for the television programmes that are part of the project. In the half-hour infotainment format “Without Borders”, which is backed by a Dutch-German editorial team, the differences or similarities between the Netherlands and Germany are regularly compared. “In the TV programme, for example, we get to the bottom of the question of what differences there are between a Dutch and German driving licence test. Or we ask whether Dutch and German supermarkets differ,” says Mario Rauch.

The programmes are also available online at www.noord360.eu.

Other formats of NOORD360

NOORD360 now also has its own podcast. This is produced in cooperation with the project module “PraktiTrans” from the INTERREG project “Labour Market North” of the Ems Dollart Region. Tessa Gilbert from the Netherlands and Caroline Wille from Germany give an insight into the work in both countries with small anecdotes. “What is noticeable: small differences in system and languages can have a strong impact,” says Caroline Wille.

Another component of the news portal is a cross-border event calendar. “It has never been available in this form before. We can offer an overview of events across the whole region and across borders,” says Mario Rauch. “We have heard often enough that people from the border region travelled to Hamburg or even further for concerts, only to discover in retrospect that their favourite band also performed in Groningen,” Rauch says.

“Our project is a further building block in bringing the region even closer together. Information provides the necessary understanding and reduces inhibitions. Our region has a lot to offer – especially when we not only look right up to the border, but also have the whole area in view. We offer the all-round view. 360 instead of 180 degrees.” 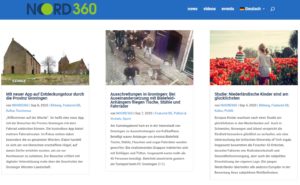 Always up-to-date: NOORD360 informs about topics and events in the northern border region.